[16-NOV-2015 update: SP5 is still not available…]
SolidWorks 2015 SP4 has compatibility issues with Windows 10. SolidWorks announced they will fix this in the next release of their Service Pack, which will be SP5. Since SP5 will be released no earlier than October, here is a work-a-round: run SolidWorks in compatibility mode.

To do this, right-click the Solidworks-icon and select properties: 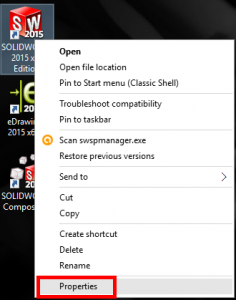 Then, under the Tab Compatibility change the settings to Run in Windows 8 mode:

There’s a second problem with SolidWorks 2015 on Windows 10: some add-ins are unavailable, like the add-in “Solidworks Simulation”. This is caused by a conflict with Windows Update KB3072630. To solve this, remove (de-install) SolidWorks AND remove Windows Update KB3072630 (via Control Panel > Programs and Features, View installed updates).
Then, run a registry cleaner. After that, install SolidWorks. The add-ins should be available now.